Marc, a Case of Psoriasis

Twenty five years ago Marc experienced his first outbreak of psoiasis. His struggle with this irritating condition lead him to visit several specialists, finally receiving the common diagnosis of widespread Vulgaris Psoriasis.

Over time his condition worsened, spreading to seventy percent of his body. Drug therapies resulted in little to average results, with an outbreak reoccuring every time he stopped taking the drugs.

Tired and dazed, Marc came to a point where he could no longer bare the side effects of his prescribed drugs. He decided to stop taking all medication and rely on the simple act of sunbathing to control his condition.

In the summer he basked in the outdoor light and in the winter he received his sun dose under specialized lamps. With this method he found a decent balance of controlling the psoriasis so that it remained only on his calves, forearms and elbows.

Lorenzo and Marc first came into contact while passing the afternoon in a friend’s garden. Through casual conversation Lorenzo shared the story of his recent progression with two clients who suffered from moderate psoriasis. Both were able to overcome and heal their condition in merely a week using the One Minute Practice.

Marc grinned in Lorenzo’s direction and lifted his sleeve to reveal the inflamed and severe state of his skin. “Would you be interested in working on a more serious case? Marc asked Lorenzo.

After the First Two Sessions 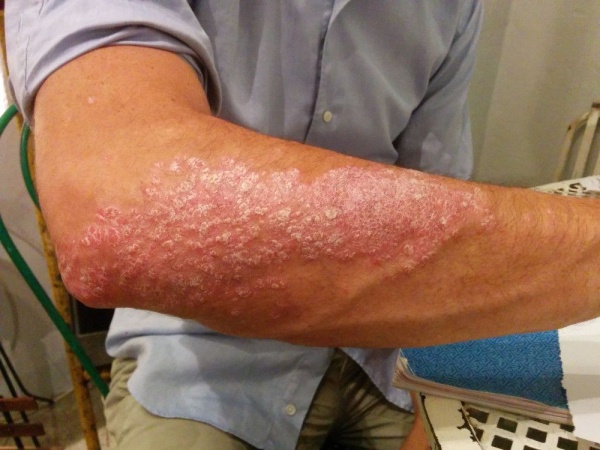 Marc begins to observe the descent of inflammation between the cracks of skin. 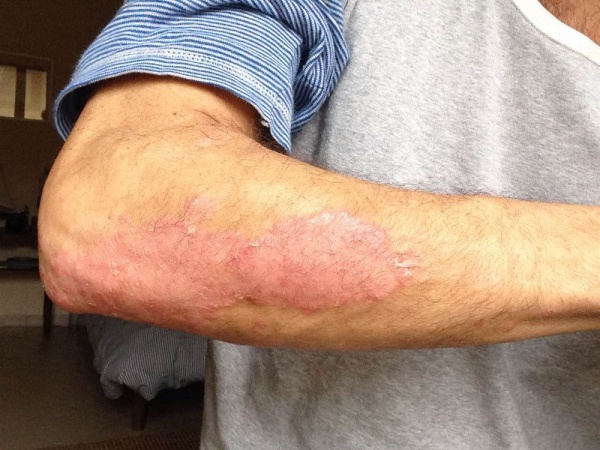 The two immediately agreed to give it a try, although Lorenzo had reservations on whether the One Minute Practice would be effective given the severity of Marc’s psoriasis.

Lorenzo began with two sessions, one week apart. The first symptom to change was the itchiness. Immediately, Marc felt the itchiness reduce. He also noticed the red inflammation between the cracks of skin virtually disappeared. Three months later they had a third session to refine and integrate the work.

Lorenzo taught Marc the Specific Breath and helped him to apply it to the areas in his torso that held tension. Lorenzo discovered a significant amount of taughtness held around the lower right side of Marc's ribcage, the area around the liver. In all of his clients who suffered from psoriasis, tension in this area was present. The Specific Breath works by releasing the physical stress of the muscles in this area up to the intercostal region. Once the tension is successfully released, symptoms start receding.

Since then, although Marc continues to lead a very busy and often stressful daily life, he takes time to implement the One Minute Practice once a day for ten minutes when he feels the condition is aggravated or if he has a bit of time and thinks of it. Stress and lack of rest are common triggers of psoriasis, both of which Marc experiences frequently.

Slowly, after 4-5 months, despite the hectic life and inconsistent application of the One Minute Practice, Marc began to notice the thickness of the psoriasis reduce. When he forgets to breathe or is under a lot of pressure from work, the inflammation returns. However, as soon as he applies the One Minute Practice the inflammation is taken care of and reduces to its dormant state.

Marc claims he is most content with the fact that for the first time he has obtained a tool that he can use confidently to reduce his condition rather than relying on medication. He also loves that it fits within his daily lifestyle and he uses it when he needs it most. He is confident that he is maintaining progress in his condition as he observes the psoriasis continually regressing.

Lorenzo taught Marc the same thing he teaches everyone: to breathe.

The key of his guidance and expertise is to ensure the quality of the breath can address all of the areas needed for improvement of the condition.

This case was the most severe example of psoriasis Lorenzo had come into contact with, most likely from the years of accumulation Marc experienced.